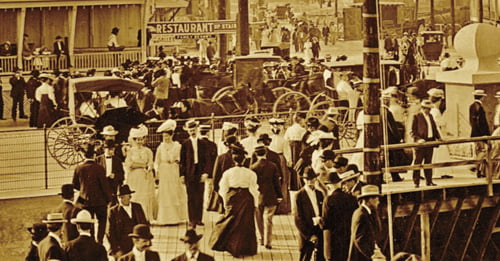 For nearly 200 years, a permanent settlement at the mouth of Galveston Bay has welcomed pirates, sailors, immigrants, and visitors from around the world. As Galveston grew, its buildings were visible signs of the city’s prosperity and the talent of its craftsmen. For many, this city was a gateway to America and an inspiration of what other communities in Texas and the Southwest would become. Although Galveston has thousands of historic buildings remaining, many have been lost to the elements and development over the years. Buildings such as the ones found within these pages define the character of our city and its culture.
Brian Davis, the author of Lost Galveston and Executive Director of the Louisiana Trust for Historic Preservation, takes us on a tour of Galveston Island’s lost buildings and stories.
Brian grew up on a farm in northeast Louisiana and received his degree in architecture from Louisiana Tech University. He worked in architecture firms in Houston and Galveston and got his start in preservation by volunteering with the Galveston Historical Foundation on committees and the board of directors. In 2004, GHF named him Director of Preservation Services, with duties ranging from management of an active revolving fund and architectural salvage warehouse to oversight of various preservation grants and programs.
In 2012, Brian became executive director of Historic Salisbury Foundation in North Carolina. While there, the organization resurrected its revolving fund program, as well as improved efficiency and the visitor experience at its sites and events.
Brian returned home to Louisiana in 2015, to establish a statewide revolving fund program for the Louisiana Trust for Historic Preservation. Fifteen months later, he became executive director for the organization. In addition to educational tours, workshops, and an annual conference, the organization works with owners of historic properties in all 64 parishes, connecting them with resources to save their buildings.
+ Google Calendar+ iCal Export