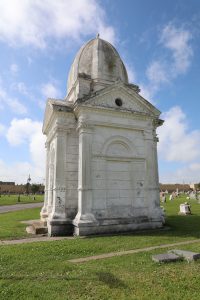 “GHF quickly recognized the significance of the Italian Renaissance classical Oppermann Vault (1885) at Calvary Cemetery when the family asked us to accept long-term stewardship for the vault,” explains Dwayne Jones, GHF Executive Director. “Not only is the family important, but it is another outstanding example of Nicholas Clayton’s architecture and engineering. The vault is one of the few remaining structures in Galveston that illustrates the extraordinary building skills of Clayton. The ribbed brick arches are beautifully shaped and formed to create a powerful resting place for family members. While not in use for some time, the Oppermann Vault is a statement to the family and to the declining generation of funerary architecture.”

ABOUT THE OPPERMANN MAUSOLEUM AND FAMILY

Following the death of Mary A. Oppermann, her husband Gustav Oppermann commissioned Nicholas J. Clayton to design and build a mausoleum for his deceased wife and the family. According to Clayton’s Galveston, the “dome proposed for Sacred Heart was a close adaptation of Clayton’s 1884 design for the Mary A. Oppermann Vault.” The mausoleum stands today as perhaps the most visible historical structure along 61st Street.

Gustav Oppermann arrived in Galveston from Hildesheim, Kingdom of Hannover in 1847 and became a prominent early Galveston real estate investor. He was interred in the vault upon his death in 1887. GHF extends its thanks to the Oppermann family for their gift and to the Archdiocese of Galveston-Houston for their help in facilitating the transfer of ownership of the structure.